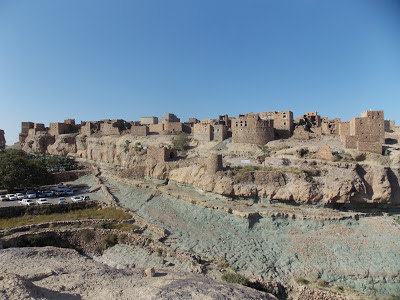 
Beyt Bouss village is one of the four villages which lie on the rocky ring, south of the capital Sana’a. Many foreigners do not know two of them, Beyt Zapatan and Sana’s village; while everybody has heard of Hadda village and Beyt Bouss village, as southern districts of Sana’a are called after them.
It’s easy to come to Beyt Bouss since it is only 7 km from Tahreer. After coming from Sabaeen (70 Street), you simply turn left on 50 Street and head down. There is nothing interesting in Beyt Bouss area along the 50 Street apart from construction sites and rubbles. However, there is a place that you should not miss. On the rocky stair, right under the mountain, lies the old village of Beyt Bouss. If you tell Yemenis that you are from Beyt Bouss, they will tell you: “Ah, so you are from the Jewish village!”

Actually too many of them think that Beyt Bouss was a Jewish settlement. Well, they are right in a way, but it was not precisely like that.

Till the mid twentieth century, tens of thousands of Jews were living in Yemen. According to the tradition, Jewish people inhabited Yemen since 10 BC right around the time when Queen Bilquis, the famous Queen of the Sabean Kingdom paid a visit to King Solomon in Jerusalem.

After the destruction of the Solomon’s temple many Jews escaped and followed Queen Bilquis back to her country – modern Southern Arabia - where they were promised shelter and peace.

The Yemeni diaspora dates back from the time of the early prophets. On the other “rive” of the Red Sea, in Ethiopia, legend has it that there too Jews came to settle, having followed Menelik – Solomon and Bilquis’ son - Yemeni Jews often proudly say that they are actually the descendant of the real Jews, arguing that their ancestry dates back from the Torah – Jewish Scriptures – where both the ancient cities of Sana’a and Sa’ada are mentioned by their old names.

After Palestine was self-proclaimed the state of Israel by Jewish settlers’ in1948, most of Yemen’s Jews left the country, dreaming of a state of their own and the so-called “promise land”. But if Yemen’s Jews live many ups and downs throughout History, always was their journey intertwined with that of Yemen’s Muslim community. For centuries, the most unlikely cousins lived, worked and prosper side by side. 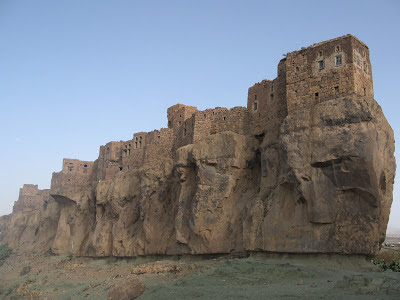 A side view of Beyt Bouss village that you would have, if you would reach it by a local’s path

Even today, Jews are still befriending Muslims, having become an inherent part of the Yemeni society. After several mass migrations, only a few hundreds Jews are nowadays living in Yemen. Beyt Bouss is actually a very particular and striking example of just how much Muslims and Jews used to support each other and respect each other traditions, in harmony without prejudice or hatred. As the old Yemeni proverb goes: Al Boussy Yahoody wa Yahoody al Boussy –villagers of Beyt Bouss are the Jews and the Jews are Beyt Bouss villagers - Like in many other places in Yemen, there were Muslims and Jewish living in Beyt Bouss. According to tradition both communities lived however in very distinct areas, coexisting but never truly blending in. While Muslims were housed within the walls of the main village, the Jewish community had settled on its outskirts, right outside the walls. At the time –some 200 years ago – Sheikh Ali Mohsen al-Hawlani, ancestor to the Mugalli family in Beyt Bouss, stroked a deal with the Jewish community.

Then, a village called Beyt al-Mahfad, was often complaining that sheep belonging to the Jewish community were illegally grazing on their lands, damaging their crops. In order to prevent a full blown tribal conflict Sheikh al-Hawlani had often to mediate a peaceful settlement – offering a cow or money as compensation – Since money at that time was somewhat of a rare commodity, Beyt Bouss villagers were always asked to pinch in and cover the amount through donations as the Jews could not come up with the full amount. After the same issues repeated itself several times, the Beyt Bouss Sheikh, who fully understood that the Jews were as much a part of his community as his fellow Muslims decided to make them a fully-pledged members of Beyt Bouss, asking them to as well participate when Muslim families were in need of the community, through payments in kinds and money.

Beyt Bouss became one united-multi-cultural and religious community. Since that very day, Jews and Muslims have lived as brothers in Beyt Bouss sharing through the hard and good times, always lending each other a hand when needed. 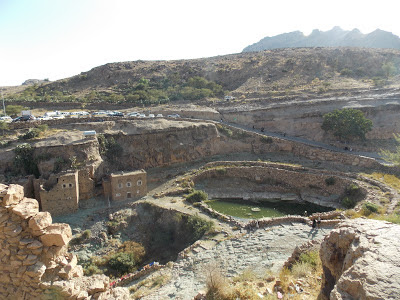 As mentioned before, Beyt Bouss today is situated in the southern part of Sana’a. From 50 Street, you can drive up to Beyt Bouss quite easily since the road has been paved! You will park your car on the stone plateau, just behind the actual village.

If arriving on a Friday afternoon, you will hardly find a place to park, as many Boussy people will arrive with their Land Cruisers and chew Qat for hours on end, leaving you stranded. The beautiful point of view is much praise by locals and is most definitely worth the peak. 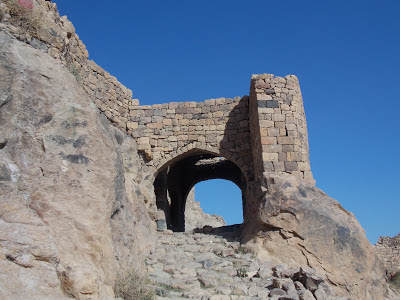 A stone arched entrance to the Beyt Bouss village

The path that leads to the village has been elegantly stone paved a few years ago. On your right you will see a big water tank that was once the village’s main reservoir. You will enter the settlement through the stone arch, which has been preserved, unlike the village former defense system, its wall. If you have a look to your right, you will see a small settlement lying under the rock, where was the ancient Jewish settlement. 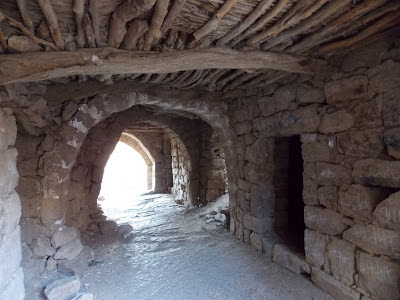 In the past, here was a small market area of the village
There are still remains of the modest synagogue. The village is alive today, but the inhabitants are not Jewish of course – all are but gone. Destitute people from Haima tribe entered the houses and are now living there. When entering the village you will pass a modest, but lovely mosque, serving for the few families that still live inside old Beyt Bouss village. The owners of the castle houses all live in their new houses, down, along the 50 Street. From the castle you will have a great look over the Nahdeyn Mountains right through the Nation's Mosque (before being called Presidential Mosque) in Sabaeen Square. 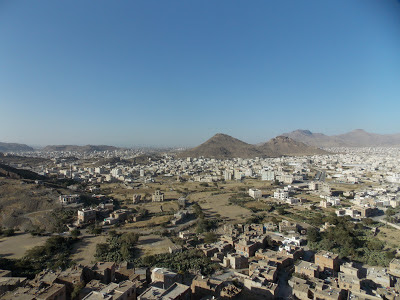 A view from the northern side of the village that overlooks Sana’a. All the area south from “The breasts” mountains, is nowadays Beyt Bouss area, crossed by 50 Street.

You can enter some of the stone houses; local kids will tell you which one is safe enough to climb in. The remains of the kitchens and storage rooms are well seen. Another approach to Beyt Bouss village is to walk from new Beyt Bouss area up to the castle. The easiest is to first come to Beyt Bouss cemetery and then head further. Maybe ask the local boys and they will happily show you the way up. You will walk along the small stony path, between the cactus trees and in 5-10 min will arrive to the top.
From there you will have a nice view over Beyt Bouss dam and the lake behind. If you want to see tribal men in their best clothes and jambiyas, you don’t need to go to Wadi Dhar but instead come on Friday morning to the Beyt Bouss dam.

At Eternal Yemen, tour operator, we can organize a trip to Beyt Bouss at any moment. The excursion can be combined with other activities, such as trekking, having traditional lunch or visiting other attractions like the new mosque etc. Contact us for all the informations ! 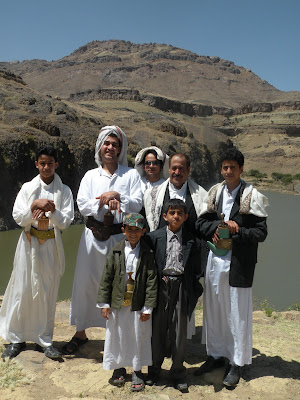 Each Friday several Yemeni families pay a visit to the Beyt Bouss dam. The men are usually dressed in traditional Yemeni outfit, with long, white robe called zanna, a shawl, a suit, and with mandatory curved Yemeni dagger called jambiya.

Posted by Eternal Yemen at 12:29 AM 2 comments: Links to this post

Happy Aid to everyone ! 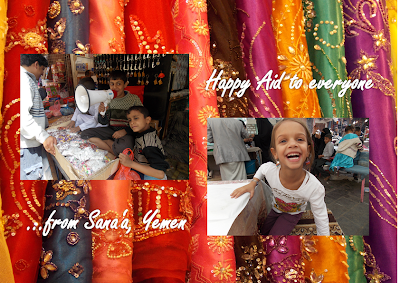 Kids having fun in the pools of Wadi D'farho in Soqotra Island, Yemen

https://www.facebook.com/pages/Eternal-Yemen/52637876341
Wadi D'farho is one of the wadis that run from the north to the south of Soqotra (Socotra) Island, Yemen and basically separate the central Soqotrian plateau to the western Dixam and eastern Momi plateau.
For most of the year the wadis are dry, while during the rains, the rivers shape and reshape the wadis appereance. In some parts of the wadis, the pools stay all along the year and offer a precious refreshment during the hot months in Soqotra.
If your time in Soqotra allows you, try to go from north to the south via unpaved road of Wadi D'farho, as you will experience the beautiful botanical garden of Soqotra. A special reward are Adenium obesum socotranum trees, known also as Desert rose or Bottle trees, that can be found all around Soqotra Island, but in Wadi D'farho, the colors of their flowers are strikingly dark pink. 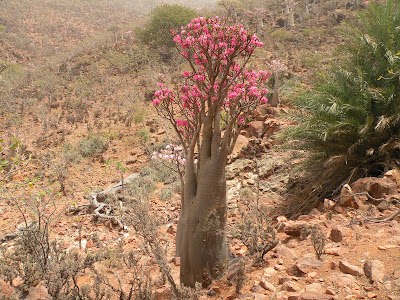 Posted by Eternal Yemen at 12:28 AM No comments: Links to this post

Eid Mubarak to all Muslims round the world and to everybody else that cares !

May prosperity, peace and harmony prevail in the next year ! 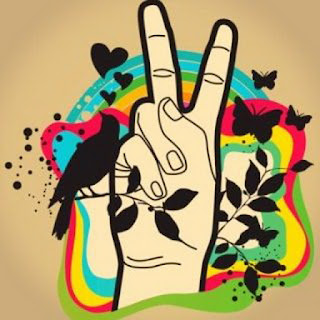 Posted by Eternal Yemen at 3:14 AM No comments: Links to this post


For a visit of Socotra Island, contact Eternal Yemen ! 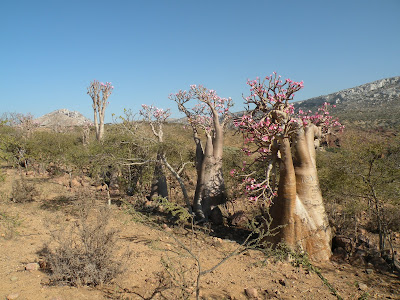 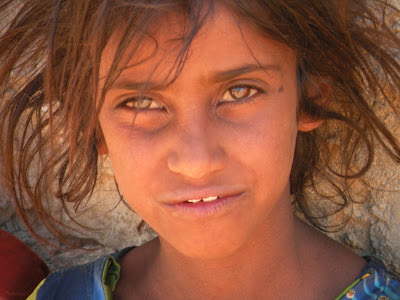 Tina Zorman and Eternal Yemen: Our favorite landscape is Soqotra Island, a pearl of Indian Ocean

If you think the same, plan your holiday in Soqotra Island, the Island of magic ! 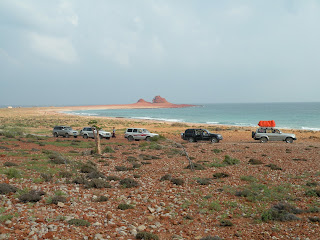 Travelling round Soqotra with Eternal Yemen will disclose you the secrets of this amazing island, a unique mozaic of splendid landscapes, exraordinary plants and animals. Our clients are well informed about the dress and behavior code and our tour programs are carefully planned to create the minimal impact on the fragile Socotrian environment and culture.

Responsible and experienced drivers, well versed guides and high quality of cars and camping equipment, together with an optimal program for your time, budget and preferences, will make your holidays in Soqotra unforgettable!


Create with us your eternal travel tale ! 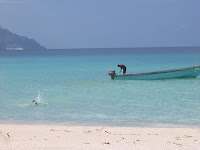 Escape the cold with a visit of Soqotra Island, Yemen

Instead of being cold in your country, visit Soqotra Island, the Island of Magic, and enjoy hiking along the fabulous landscapes, swimming and snorkelling in the warm sea or simply relaxing along the unforgettable tour that Eternal Yemen, tour operator, will prepare for you ! 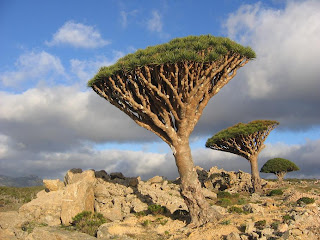 Soqotra Island that lies 400 km south of Yemeni coast, on the meeting point of Arab Sea and Indian ocean, is one of the most amazing places in the world. Largely isolated island till a decade ago, is very well known among biologists round the world as a paradise of biodiversity. Due to the splendid landscapes, rich and distinct flora and fauna, globally significant populations of land and sea birds and diverse marine life, that is unique hybrid of species from the Red Sea, the Indian Ocean and the western Pacific, Soqotra was included on UNESCO World Heritage List in July, 2008 as a site of universal importance. 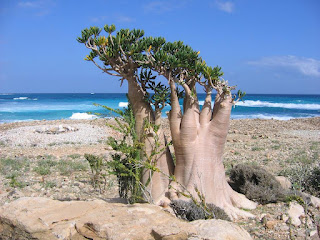 The best time for visiting Socotra Island is from October till the mid of April, so if you wish to jump to a splendid and warm place in the next months, Soqotra Island is the destination for you !
Upon your request, the tour can be prepared at any time from September till the mid of May
Guaranteed tour departure: Soqotra adventure – one week: 14.03. – 21.03. 2012
Contact us to info@eternal-yemen.com
http://www.eternal-yemen.com 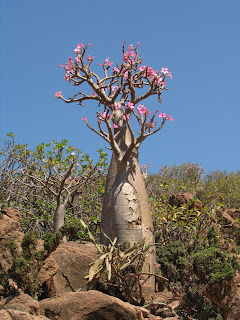 Posted by Eternal Yemen at 11:10 PM No comments: Links to this post